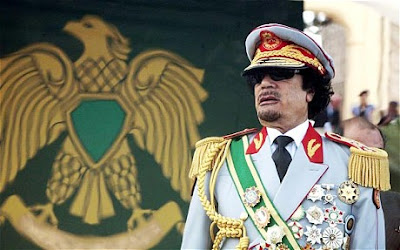 Libyan leader Muammar Gaddafi may be heading to Venezuela, Foreign Secretary William Hague has suggested, citing "information that suggests he is on his way." Several media have also reported rumors that Colonel Gaddafi was headed to Venezuela
This follows the strike that has now covered almost the whole of Libya as protestors rock Tripoli,the Libyan capital.

More than 230 people have been killed in clashes between the army and protesters in Libya as anti-government rally reached the Libyan capital for the first time and the building where the country's parliament meets was set on fire. After Gaddafi's son of Libya vows to fight to the end " troops will fight until the last man standing" to defend his regime, his son, Saif al-Islam Gaddafi, said as forces battled protesters in the capital Tripoli.

Oil companies plans are underway to evacuate its employees and families as the turmoil rocks the capital of Libya (Tripoli)after Gaddafi's son speech.The political unrest has now disrupted most essential activities countrywide.The largest and most established foreign energy producer in Libya includes:-Eni of Italy,The Norwegian energy company Statoil,OMV of Austria and others.